Victorians have rallied around the state on September 29 to protest the new anti-wind planning laws brought in by Premier Ted Baillieu one month earlier.

In Geelong, 40 people from local environment groups, construction workers and other unionists rallied at the front of Liberal MP Andrew Katos’ office in Belmont.

Protesters hung a big banner with a picture of a wind turbine off the front of the office. The protest was addressed by Labor MP Gayle Tierney.

In Ballarat, around 50 people met at the front of the office of the Premier, including representatives from the Greens and local Trades Hall. The event was organised by Ballarat Renewable Energy and Zero Emissions (BREAZE).

BREAZE members were asking for a meeting with the Premier to express their concerns that recent changes to wind farm and solar laws will harm employment in Ballarat and hinder greenhouse gas reduction efforts in Victoria.

“Ballarat stood to gain significant jobs and economic stimulus from wind farm development in our region but those benefits are now in doubt after the Baillieu government’s changes” BREAZE Executive Officer, Geoff Adams, said in a press statement.

Susie Burke, MASG committee member said “We are inspired by the Hepburn community wind project in nearby Daylesford which powers over 2000 homes and won the Premier’s sustainability award this year and we want to do something similar.

“We want to own and operate a small wind farm, which would produce our electricity cleanly and safely, where the profits from the sale of the electricity benefits local people.

“We can’t understand why on the one hand the Coalition Government awards a community wind farm down the road but, then places significant obstacles to building similar wind farms in our area.”

In Melbourne, 100 people including a good representation from wind energy companies, climate action groups and the Australian Manufacturing Workers’ Union rallied on the steps of Parliament house. MPs from the Greens and Labor attended as well, and the Electrical Trades Union sent a message of support.

Speakers condemned the loss of jobs caused by the Premier’s attitude to renewable energy, the unfair restrictions on community wind farms, and the damage done to taking action for the climate. They called for the recent changes to be reversed. 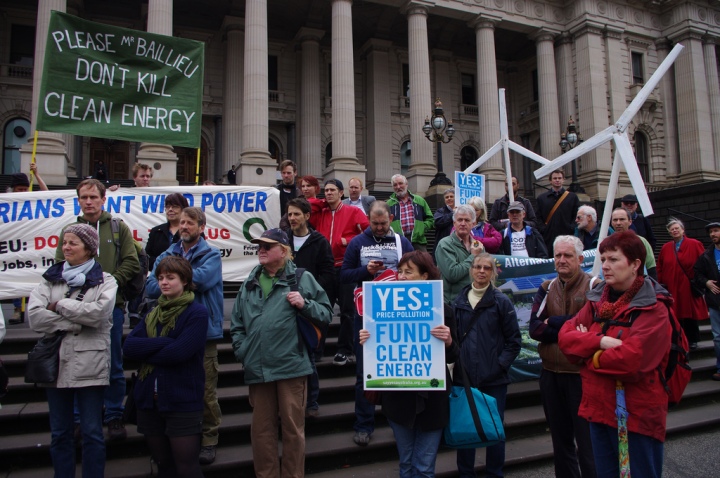 “We will keep pushing on this. We are not going away. This is a campaign for our future and we can’t afford to give up on it.”

10 thoughts on “Community protests for renewables: “We are not going away””